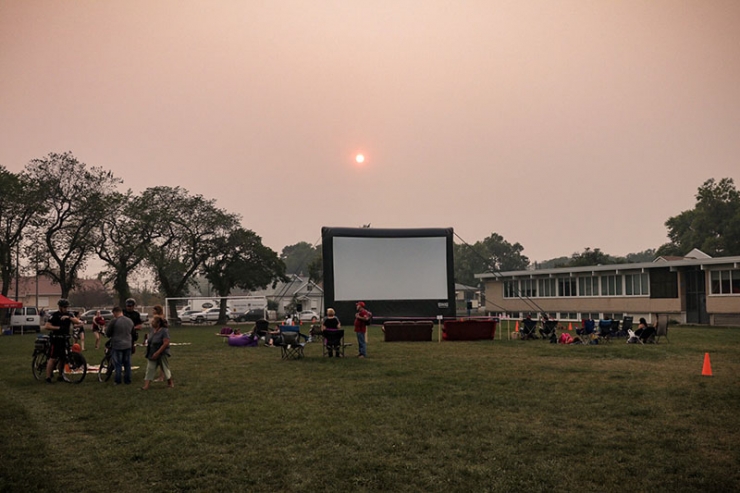 Community members getting ready to enjoy a movie at dusk in Caboto Park on August 10. Todd Homan

It’s been a beautiful summer and your Community League Board decided not to meet in July while most folks were away, but we did manage to pull off at least one event. “Movie Night in the Park” took place on Friday, August 10 at Giovanni Caboto Park. The idea was floated by one of our new board members, Jordynn Vis, who took the lead and really went above and beyond to get it all arranged.

The event featured the movie My Big Fat Greek Wedding, which is a great romantic comedy centering around the story of bringing people of different backgrounds together. The night was a free alternative to other events in the City that come with a price tag, and could be enjoyed by the entire family. We set up the League’s Bouncy Castle which was a huge hit with the little ones, had an airbrush tattoo artist, and Dan the Balloon Man also brought some fun for the kids. The folks from Norwood Dental Clinic came and handed out floss, toothbrushes, and glow bracelets. Celebrations Mini Donuts were there to sell those tasty little fried mini donuts. Finally, there was the Air Couch vendor who came up from Calgary. The League handed out a bunch of tickets for giveaways and the biggest hit was the “Best Seat in the House” prizes which saw winners seated front and centre on one of two full size couches we brought in for the evening. While it is hard to get an accurate count, we estimated close to 180 people were in attendance and responses from community members were overwhelmingly positive. As always, if you have ideas for events and activities you’s like to see the League undertake, please let us know.

New also this year is also surrounding our memberships, which are due for renewal in August. They will be provided at no cost to anyone wanting one. You can pick them up at Zocalo or from the League. Email us at mccauleycommunityleague2014@gmail.com to find out how. We are hoping to increase our numbers and engage more of the community. And keep an eye out for poster about the Fall Fiesta on September 15 at Giovanni Caboto Park.

Among other items of interest, the League was invited to join a conversation on affordable housing along with Queen Mary Park and Central McDougall. The intent was to gauge intent and determine whether we should create a coordinated voice in response to the City’s discussion regarding affordable housing in the City. As many know, McCauley represents a very different landscape when it comes to affordable and/or social housing. This was primary among topics and involved determining what is to be considered under the term. Currently, the numbers used by the City do not reflect all of the different housing models in use and the argument is that without a more inclusive definition, the percentage reflects inaccurately the reality. The City has this item on its Executive Committee agenda at the time of this writing and hopefully there will be more to share next publication.

Your League is here to represent your concerns and help to build a safer, vibrant, and inclusive community that all can enjoy. Please help by sharing your feedback and ideas. Or, better yet, come out and get involved.